How to Get Rid of Boxelder Bugs 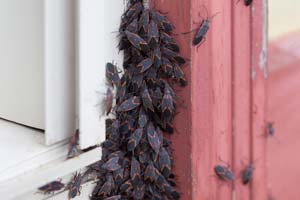 As we settle into the cold winter season, many of us are bundling up and staying indoors to stay warm. But, we aren’t the only ones seeking shelter inside! Some insects will also try to sneak into our homes to get out of the freezing temperatures. One such overwintering insect is the boxelder bug, which is particularly common in the Pacific Northwest.

Boxelder bugs, also known as maple or zug bugs, are about ½-inch in size and have wings. Their elongated, oval-shaped bodies appear flattened, and they are generally black with reddish or orange markings. While boxelder bugs are not known to be dangerous or aggressive, they can be quite the nuisance – especially if they stain furniture or fabric with their reddish feces.

Tips for Getting Rid of Boxelder Bugs

How to Prevent Boxelder Bugs

Boxelder bugs can be annoying and unsightly houseguests, and infestations can be tricky to stop. If you’ve tried all of these tips and are still encountering boxelder bugs in your home, it may be time to elicit the help of a professional. Luckily, the boxelder pest control experts at Interstate Pest Management have your back! Our experienced technicians can help eliminate boxelder bugs from your home, once and for all. Just give us a call to get started!