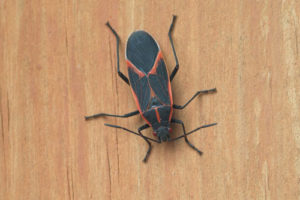 Once spring arrives most boxelder bugs and stink bugs venture back out into the outdoors to begin reproducing and feeding, then the cycle restarts with the new generation. They both pose no serious threat, but may leave behind annoying stains. So the question is, what’s the difference between the two?

What’s the difference between boxelder bugs and stink bugs?

Neither boxelder bugs or stink bugs are dangerous, but they do look quite similar. Here are some characteristics that help differentiate them.

How to Prevent Boxelder Bugs and Stink Bugs

Both boxelder bugs and stink bugs love a good warm area to rest during the winter, and if you don’t want that area to be your home, there are some prevention steps you can take.

Boxelder bugs and stink bugs are both tiny insects, about one to two centimeters in size making it easy for them to invade your home. Sealing tiny cracks and equipping your door with a door sweep should keep most pests out. If you have any punctured screen doors or damaged windows, those must be repaired as well.

We hope these tips help. However, if you find these pests have infiltrated your home, contact us. We’ll get to the root of the problem and provide ways to help keep them away.

While boxelder bugs and stink bugs aren’t capable of much damage, they can still be a nuisance, especially in large quantities. So if you’re dealing with an infestation, contact Interstate Pest Management. We’ll locate the pest and recommend a treatment to scale back the infestation. Contact us today to get started!