Do Bees, Wasps, and Hornets Return to the Same Nests? 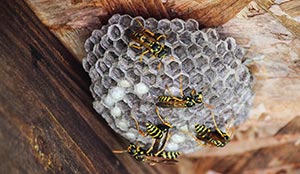 Discovering a stinging insect nest on your property can be alarming. Not only do bees, hornets, and wasps produce painful stings, but if you’re allergic to their venom, a sting can be lethal. To learn more about these stinging insects and if they return to their nests every year, keep reading.

Recognized for their round fuzzy bodies, bumblebees are typically non-aggressive insects who live and nest in premade cavities in the ground. Until winter comes around, these bees thrive together in a nest where they care for newborn larvae that are produced from a single queen.

Once spring arrives, bumblebees will emerge and begin forming nests. The female worker bees are responsible for collecting pollen and building the nest while the queen births new larvae. In late summer, the nest is fully built, with new queens who will venture out to hibernate through winter and create new nests next spring. The drone and worker bees who were left behind will freeze and die throughout the winter and their nest will never be used again.

The Deal with Wasp and Hornet Nests

Widely known for their aggressive nature when antagonized, wasps and hornets are stinging insects who nest in trees, the ground, attics, and wall spaces. Similar to bumblebees, wasps and hornets also emerge in early spring to create nests and feed growing queens for the next generation.

As the nest develops, wasps will be much more hostile and protective of their nest. Once winter arrives, the new queens will move on from the nest and the worker bees will die off.

When are nests safe to remove?

If you’re interested in removing an old, inactive nest from your property, you’ll want to wait after the first hard frost. If you’re dealing with an active nest however, you’ll want to reach out to a professional such as Interstate Pest Management as some people and animals may experience severe reactions from stings. We’ll recommend the best course of action for the stinging insect.