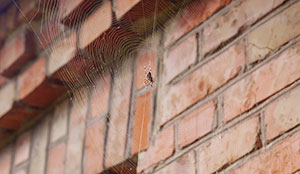 While spiders can be beneficial, by eating mosquitoes, flies, and other insects, some species can be aggressive and deliver very painful and poisonous bites if provoked or cornered.

Nearly all spiders have venom, but only a few can actually puncture through human skin and cause health risks. In the United States, there are mainly two spiders that are considered dangerous to humans: The Black Widow and The Brown Recluse. However, here in the Pacific Northwest, you only have to worry about black widows. Contrary to popular belief, brown recluse spiders are not native to the Pacific Northwest.

The Black Widow Spider is active during the spring, summer, and fall. It preys on a variety of insects including, beetles and cockroaches. This species commonly inhabits woodpiles, debris, and cluttered areas in basements and crawl spaces where it will go undisturbed. Female black widow spiders are extremely protective of their eggs and will not hesitate to bite if her nest has been disturbed, which can often happen unintentionally.

A black widow spider bite may not cause initial discomfort, but the powerful venom will begin to affect the central nervous system immediately. You’ll begin to experience pain throughout your body in addition to chills, difficulty breathing, and vomiting. Delirium, heart palpitations, and severe sweating are also common symptoms of black widow spider bites. Most people who have suffered a black widow bite recover in about week, however, there’s a 5% death rate associated with bites, with the most deaths being children and seniors.

Another spider worth mentioning is The Hobo Spider. This species is very common in the Pacific Northwest and it prefers dark, cool spaces just like The Black Widow. However, this spider is not a health threat, like many people think. It was previously believed that hobo spiders inflicted necrotic lesions similar to brown recluse spiders, but several studies have proven otherwise. This spider is larger than other spiders, ranging in size between 1/2″ to 5/8″ and it will bite if disturbed, especially if it’s tending to an egg sack.

How Can I Prevent Spider Bites?

Can You Be Allergic to Spider Venom?

Yes, many people can be severely allergic to spider venom. If you or someone you know is experiencing the following, you’ll want to seek medical help immediately.

If you have a dangerous spider in your home or business, contact Interstate Pest Management. We’ll treat the infestation and help prevent it from coming back in the future by performing exclusion techniques. Contact us today for a free quote!