What do Boxelder Bugs Eat? 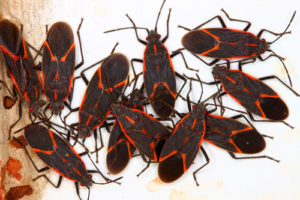 If you’re working to prevent a boxelder infestation, it’s important to know what attracts them in the first place, so keep reading to learn more.

Boxelder bugs thrive in heat, and are more often than not found nesting in boxelder trees during spring, and summer. When winter comes around, they often seek shelter inside warm homes to ride out the cold.

If you see boxelders in your home in the winter, don’t ignore it. You may find yourself with a troublesome infestation later.

How do Boxelder Bugs Stay Alive?

During summer and spring, boxelder bugs’ main source of food are boxelder tree seeds, maple seeds, tomatoes, and grapes. They reproduce during spring and the early months of summer, creating a new generation of boxelder bugs that will have been fully matured by the end of summer, and search for a warm climate to hibernate during winter.

How Can You Prevent Boxelder Bugs?

Prevention of these pests is harder than it looks, since they only need a half-inch wide hole in order to get inside of your home. Sealing your residence, and repairing small holes and cracks around your home will help prohibit boxelder bugs from entering your home and disturbing your winter. Also pay attention to damaged windows and doors.

Although boxelder bugs pose no serious threats, attempting to get rid of them yourself could attract other pests into your home that feed on the boxelder bugs’ carcasses, making the situation twice as difficult.

To prevent a second or worsened infestation, we recommend you contact Interstate Pest Management. Our pest control technicians are proficient in dealing with boxelder bug infestations and we are knowledgeable of the attributes of boxelder bugs. We’ll inspect your home and treat it to help combat your infestation. Give us a call today for your personalized estimate!